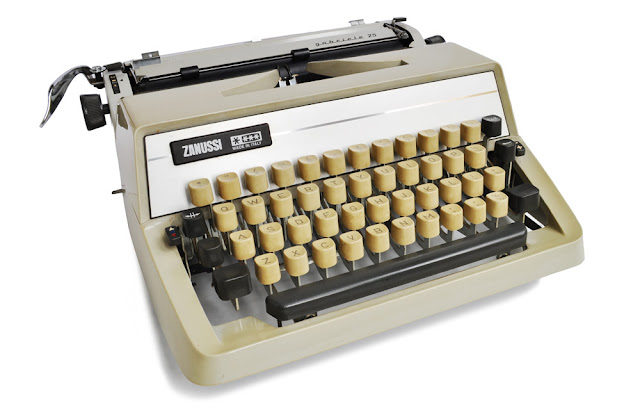 S/N: No idea, can't find one. Maybe there isn't a large nough piece of metal to make a stamp.
Colour: Shades of grey, sunburned to yellowish beige
Manufactured: Triumph-Adler (T-A) Industries, West Germany, 1968 - 1973
Not a pretty machine, but it was donated to Typewriter Heaven by a friend. It types OK but the real bonus is the Techno typeface. NOTE: The Zanussi badge is a joke - I stuck it there because there was a hole where the Adler badge must have been. 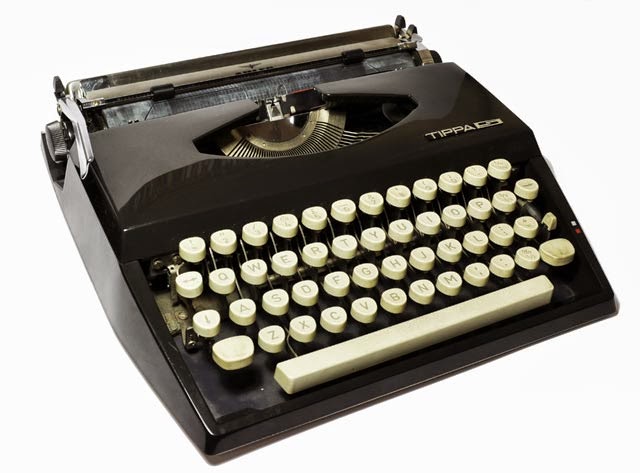 S/N: 4888464
Colour: Dark charcoal plastic body.
Manufactured: Grundig Corporation 1968
I would have thought the more angular design would be more recent than the curved Tippa below but it turns out to be four years older according to The Typewriter Database. A 2015 Christmas present from Robin from the second hand shop in Whaley Bridge. 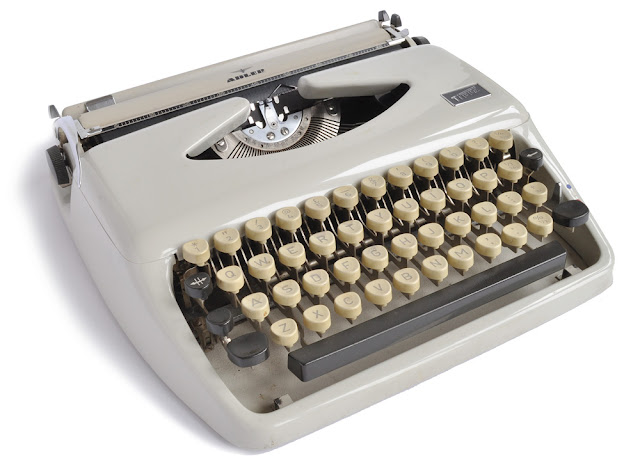 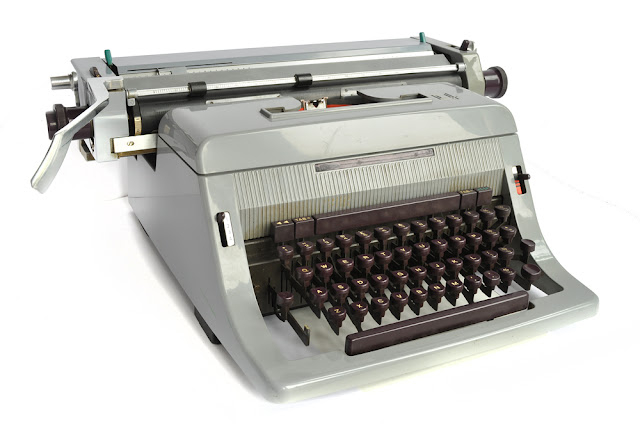 S/N: B03 0537
Colour: Grey with burgundy keys.
Manufactured: UK (Glasgow?) 1969/70
This is a massive machine which types really well. It is the antithesis of portable. Hit the tab and experience a freight train flight of the carriage. Unstoppable! The grey plastic body cleaned up OK with soapy water and lighter fluid (a work in progress). The speed margins didn't work until I took the top part of the carriage off (fiddly thin sheet metalwork), cleaned it up and very lighlty oiled it Rescued (reluctantly) from the bottom of dad's wardrobe. It is missing a caps lock key top. Near the typescale is engraved "Mrs L Wilson". 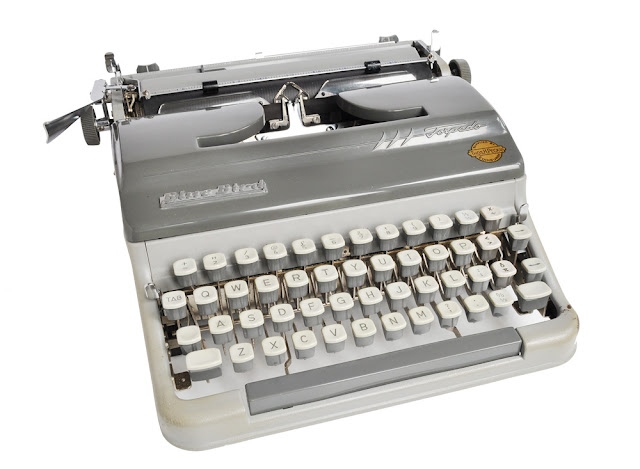 S/N: 1310352
Colour: Two tone blue-grey
Manufactured: West Germany 1964
As far as I can tell, this is one of the last Torpedos (branded Blue Bird for the UK market) before Remington moved the company to Holland, deleted the brand and the machine was face-lifted to become the Remington Envoy and Monarch models. Bought from the late Scottish owner's son in Kennington, Oxford for £16.04. Note the unusual science/maths keys. A very well-used, good to type with machine! 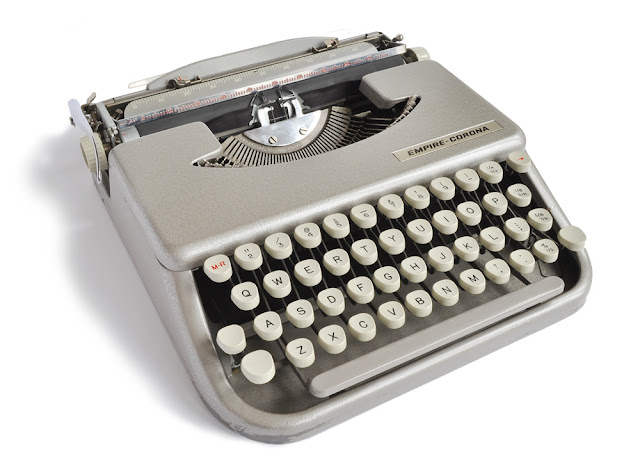 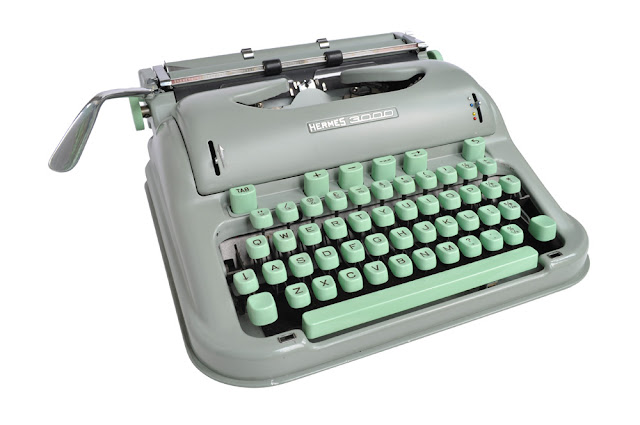 S/N: 3112982
Colour: 'Seafoam' green
Manufactured by Paillard S.A., Yverdon, Switzerland 1962
This is as close to brand new as any typewriter I have. I found one, solitary grey hair below the keys. Barely a scratch or sign of use. The previous owner was a Mrs Parker from Lymington - she looked after her typewriter! I bought it for £21.57 from a man in Hampshire who lives in a caravan and clears houses. 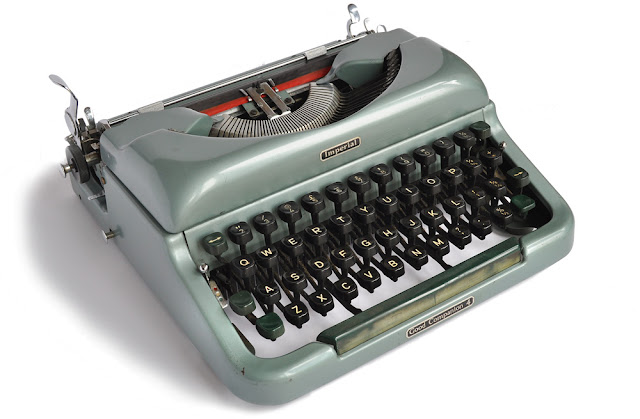 S/N: 4 BS401 T
Colour: Metallic blue/green.
Manufactured: Kingston-upon-Hull, UK. 1961
More about the Good Companions here.
This model lies the paper much more flatly (like a Remington Portable) so you find yourself having to lean forward to read what's written. Rescued from Oxford (along with the Olympia SF, above) via eBay, £10. 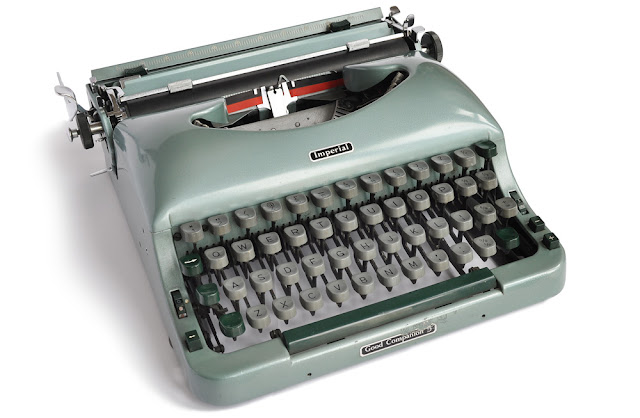 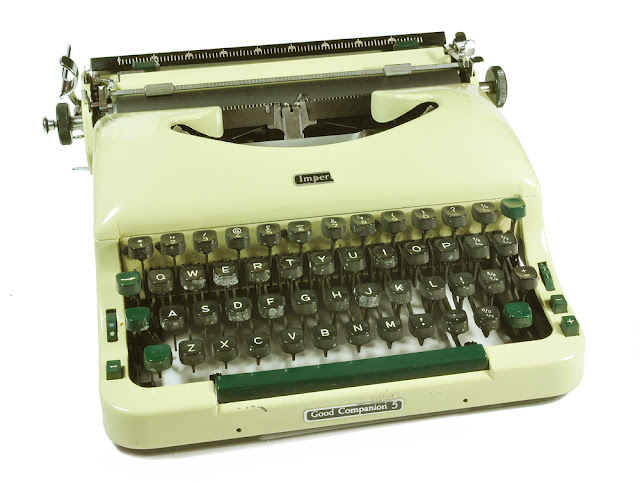 S/N: 5M919
Colour: Ivory
Manufactured: Kingston upon Hull, 1958
See the spoof brochure I made for this machine. 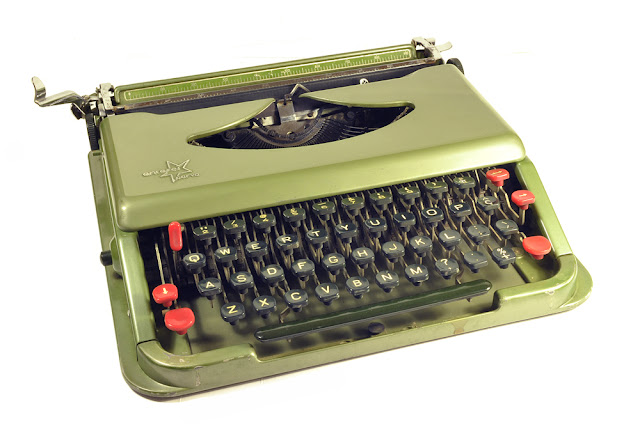 S/N: A-01626
Colour: Green metallic
Manufactured in Italy, 1954-60
The only typewriter I have with a special key (next to the 2) for unsticking jammed type heads. This one came 'bundled' with the two-tone green machine on the Remington page.
See the spoof brochure I made for this machine. 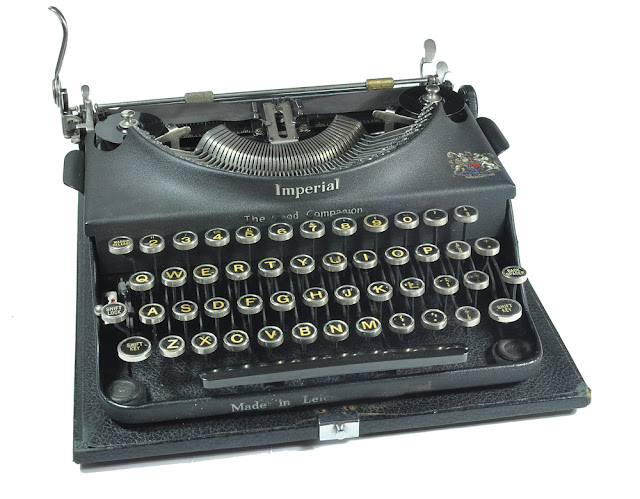 Colour: Black craquelure
Manufactured in Leicester, 1943
Great marketing. Who wouldn't want a typewriter called The Good Companion? This one's 99% OK and works. Not sure why matt-finishes were popular during WW2... 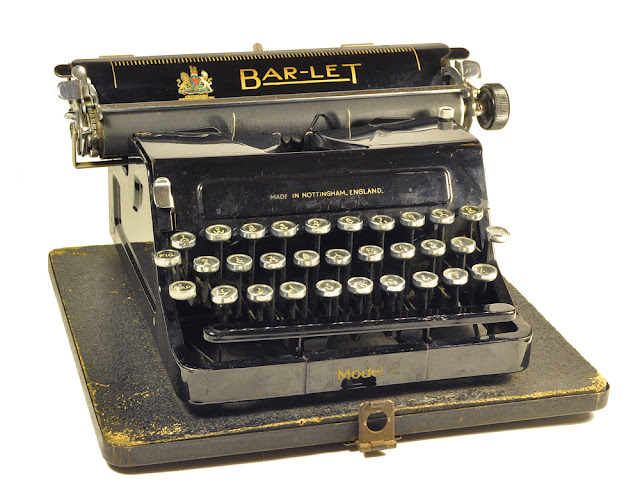 S/N: 30158
Colour: Black
Manufactured: Bar Lock (1925) Company, Props. John Jardine Ltd, Nottingham, England, 1936
Friends Barbie and Ben looked after this for about 6 months before I could pick it up from their house in the East Midlands. It is a bit of a wreck, but I think it is repairable* - there are only a few screws missing and I don't think any are 'vital'. It is made out of sheet materials and the cover is light gauge steel. Built to a price - I think Jardine had a contract to supply typewriters to the police. * see improvised repairs 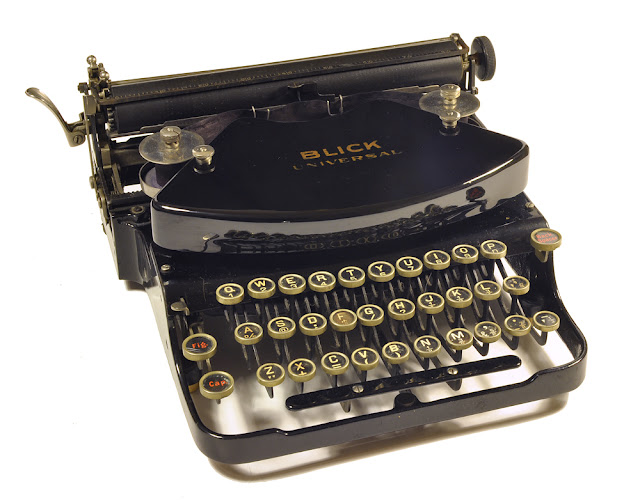 S/N: 210444
Colour: Black
Manufactured: Adlerwerke, Frankfurt-am-Main, Germany, c.1921
Klein Adler (little eagle) re-badged and sold in UK by the Blick Typewriter Corporation - no connection with Blickensderfer. Horizontally sliding type heads. Please get in touch if you know where to get replacement 7/8" ribbon! I paid £6 for this at the Tuesday flea market in Bradford, c.1982. The stall-holder wanted more but the carriage was off and it clearly wasn't working. The case is lined with dark green watered silk. Bittersweet to recall, but the previous week a different stall-holder had an Oliver 9 without any rust. A typewriter mated with a church organ - impressive. As a student, the £19 asking price was too much. 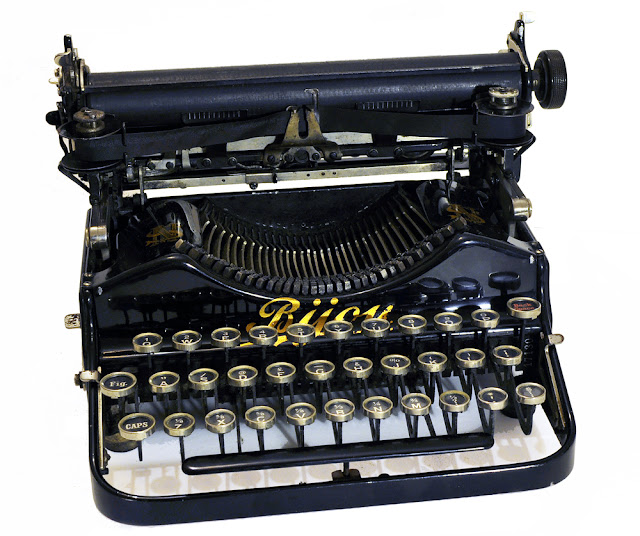 S/N: 17130
Colour: Black
Folding typewriter
Named Erika, after Naumann's daughter. UK exports re-badged Bijou
Manufactured: Dresden, Saxony, 1915
One from the wish-list. A birthday surprise from Anabel! It obviously hadn't been used for a long time. The return spring, escapement and back space mechanism were either sticking or seized. Pretty easy fix to get everything working, but it still needs some time spending on it to be in good working order.