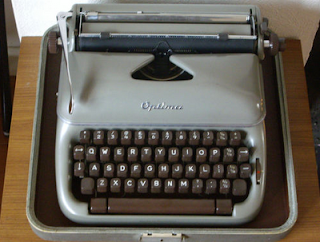 On the strength of Florian's recommendation, I bagged myself some Cold War iron with this Optima. It is quite a distance for me to collect but plans are afoot for a pick-up. Thank (Typewriter) Heavens for godchildren - though technically I'm a supporter rather than a godfather - my accursed atheism gets in the way sometimes. Chocolate keys and the nose of a lazy dog!
Posted by Rob Bowker at 19:13 6 comments:

Email ThisBlogThis!Share to TwitterShare to FacebookShare to Pinterest
Labels: Optima 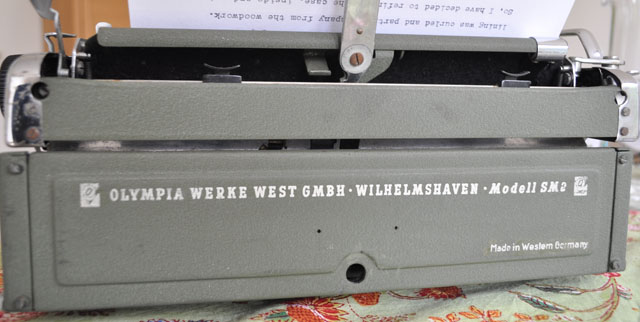 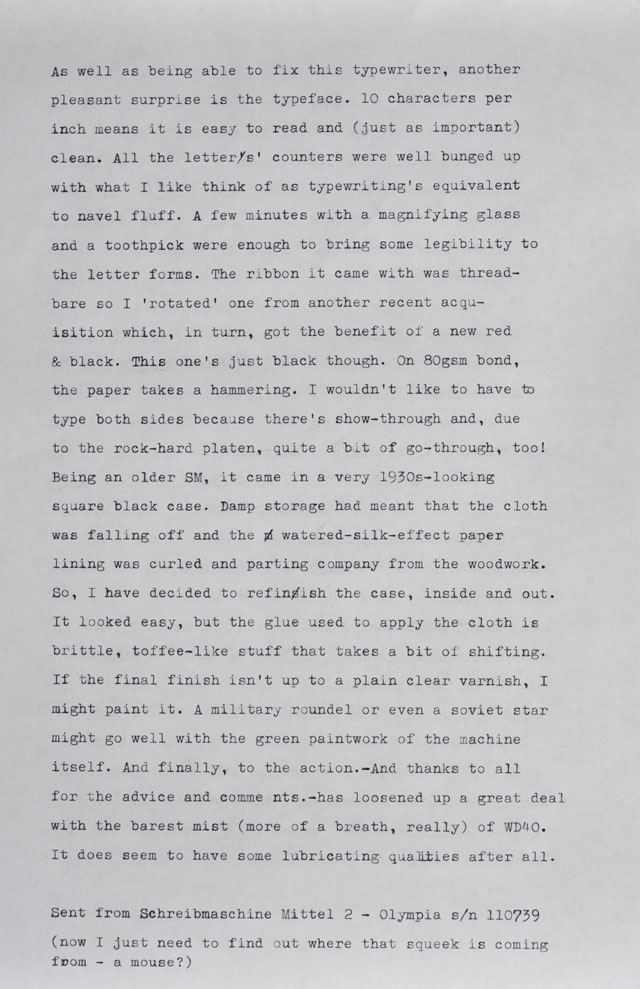 
Lazarus? Larry? It'll do as a name (strictly one-off) until I make a note of the serial number. First look, its appearance is better on-screen than in the flesh (how often do you hear that in the green room).

Apart from blowing away some dust and hair and moth larva cases (and the laying on of hands), I haven't cleaned it. There's tarnish to the brightwork on the carriage, especially the control surfaces. This is just part of the machine's story, like wrinkles. But in comparison to an SM3 in far finer fettle, the key action is a tiny bit on the stiff side. The surface tarnish has affected the segment but it is easing with use. It is impossible to clean the slots and the pivot area of the type arms so I'm tempted to try a miniscule drop of WD40 (a "dry" lube) along the pivots to free them up further - any objections?

Notes
There's a group of men in the street in hi-viz jackets digging a hole. They are either looking for Lazarus or fixing my broadband. Hard to tell. Hard hats conceal halos.


This is Typewriter Heaven, but we'd rather be raising the dead than super-gluing wings to typewriters, especially post-Easter:

Having recently teetered on the brink of getting a much-coveted Hermes 3000, I decided to neither pay tons of cash nor take a risk on a broken "Buy It Now" example from a commercial business clearance depot. Sincere thanks for fellow collectors' advice. As consolation, and in the true spirit of these austere times, I took a chance on a £10 Olympia SM2. This, too, was listed by the seller on eBay as "carriage return not working" but it was for sale nearby and Olympias are fixable, especially if you have working models to compare with.

At first, I couldn't even open the case. The familiar catch was a bit rusty, never a good sign. Then, inside I found that the typewriter wasn't fixed to its mounts inside the case. Aaaargh! But it didn't seem to have suffered. What was immediately obvious was that the carriage return was indeed not working. It just ran freely and with lots of for and aft play (let's call it yaw) up and down along its tracks - unimpeded by the escapement except when a key was pressed. With the help of an SM3 for comparison, I managed to track down the problem to a delicately sprung ratchet pawl - easily reached from below. A couple of drops of WD40, an hour or two to for it penetrate, and the legendary silent ratchet action of the Olympia's carriage was restored. Big smile.

Next-up, the "yaw" in the carriage meant that the characters were coming out faint along their bottom edges. The two screws holding down the carriage rail are in different spots to later SMs, but still recognisable and easy to reach. One of the screws wasn't very tight at all. Slackening-off both screws to the "just tight enough to hold fast" torque setting and pulling the front rail forward evenly was enough to take all the excessive play out of the rails. Screws tightened and all the characters are now even.

Some people give their typewriters names. I don't. Still, welcome to Typewriter Heaven, Lazarus.

This corner of the firmament is currently without internet. To augment the power of prayer, an engineer will call, apparently. So, photos coming soon with a "how to..." guide on locating the parts addressed above.

Apologies to teeritz for the unauthorised photo borrow. Apologies if references to Christian history offend. Most of all, apologies to you, Giotto - you couldn't have foreseen this misappropriation while you were mixing the egg tempera.
Posted by Rob Bowker at 10:52 6 comments:

I'm backing (for a VERY modest sum) a Kickstarter project by this writer/poet I came across named Maya Stein. To mark her 40th birthday, she's taking on an unusual writing project: biking from Amherst, Massachusetts to Milwaukee for 40 straight days towing a typewriter behind her. She'll be cycling for about 1,300 miles and holding typing events along the way, inviting people to contribute to a collaborative piece of writing she'll publish after she returns in June. She needs some help reaching her funding goals in time for the April 23 Kickstarter deadline.

Find out more about her project and the reasons she's doing it.
Posted by Rob Bowker at 23:45 2 comments:

This just dropped in to my e-mail inbox. Keira Rathbone carries the drawing-with-a-typewriter torch.

The saying about London buses goes: you wait for ages and none arrives, then three come at once. 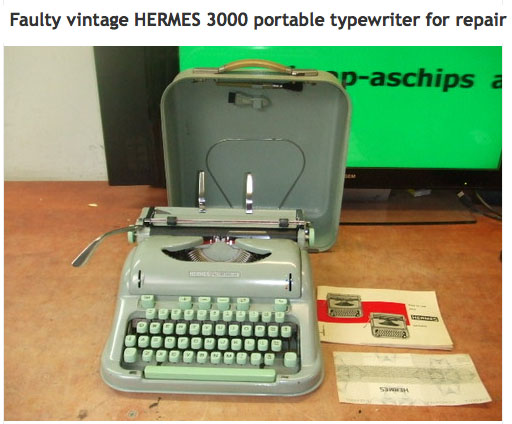 So, this item is a good price and "buy it now". Imagine the temptation.
Being described as faulty, but could just be a simple ribbon or drawband replacement,
or the seller doesn't know where the carriage lock is... 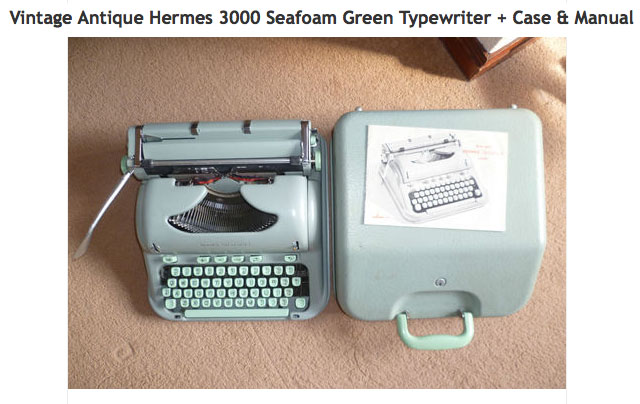 Then there's this one, no claims to be working but a much nicer case and with a price
approaching the top end of my limit.