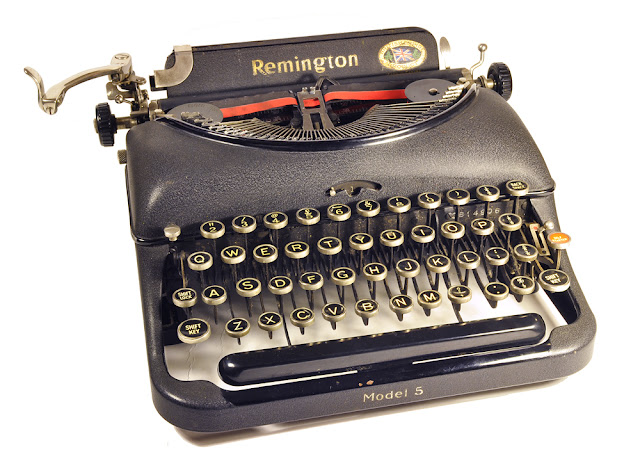 S/N: CB14906
Colour: Black craquelure
Manufactured in Canada, 1939-40
My first typewriter. Uncle Colin gave it to my dad in c.1969 - it left home when I did because I was the only one interested in it. I used it to type essays and final dissertations at college, 1984. Anabel got me a pair of cycling gloves in exchange for typing hers on it!
Remington Noiseless Portable 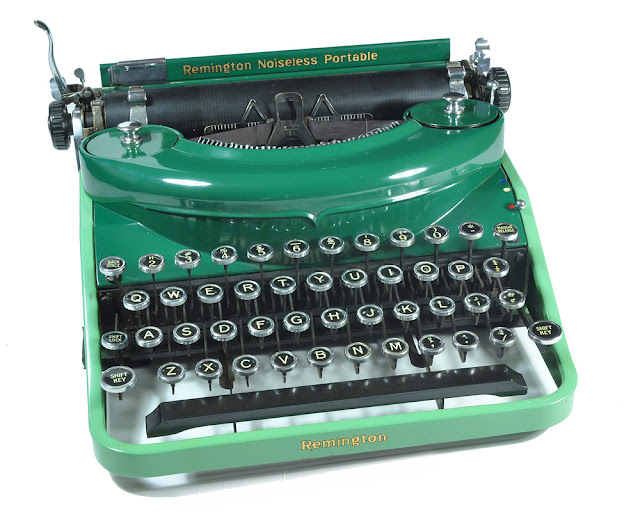 S/N: N48665
Colour: Two-tone green
Manufactured: Remington Typewriter Company, 1934
Back-story: I collected this one from a large old house in the Manchester suburbs. The chap was clearly living alone - a Batesian frisson. Glad it was a family trip. Me, Anabel, Robin, Di and Di's (then) bf, Monty. It turns out that it used to belong to the guy's late aunt: the story goes that this typewriter was originally bought by a very (very - there's a University named after him) successful businessman for his secretary/lover. Some say it with roses - a beautiful typewriter is so much more practical! 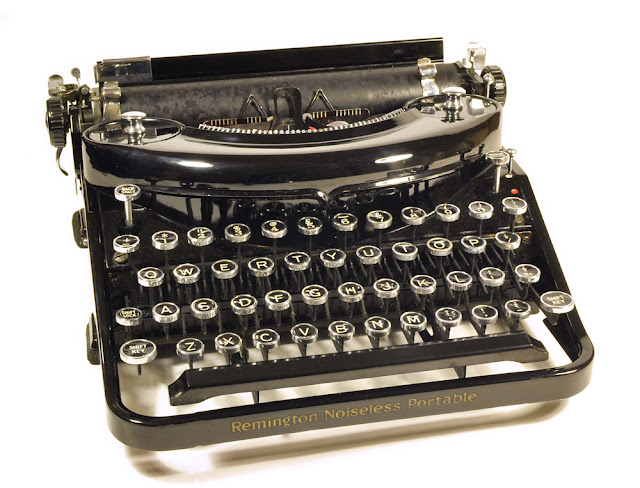 Note: extra keys pierce the cover plate,
and there's an interesting 'Rs' key. Rupees? Rand?  I picked it up from a big house on the outskirts of Reading. It was quite late but Robin came too. I'm always surprised that people are so trusting when they share their address. The typewriter had belonged to an aunt - all we know is that she worked overseas for the government. Not the ideal model for a budding Vesper Lynd. 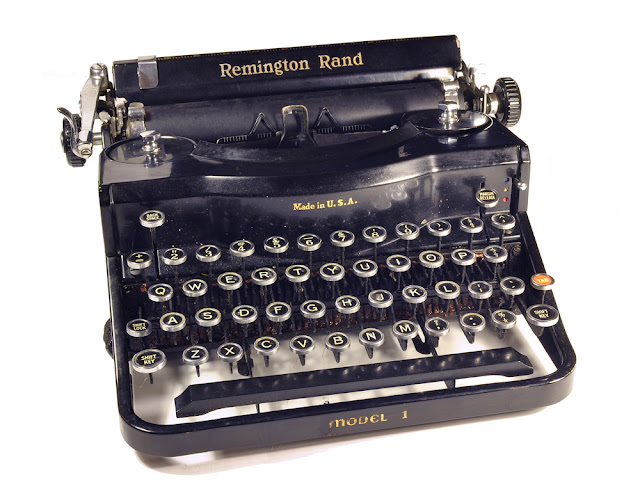 Note: this is the only machine I have with accents. There's no carriage advance for acute, grave, cedilla and circumflex. It is a tabulator model. One of 95,550 made between Feb. 1933-March 1941. I got this one by accident. I bid on ebay for it, about £4, and the location was pick-up-friendly. Somewhere in London. All the rubber-ware is decomposed and it stinks, but there's a lovely typewriter in there somewhere. It is built like a tank and shares similar type action to the Noiseless Portable, above.

Colour:Gloss black
Assembled by British Labour at the London Factory of The Remington Typewriter Company Ltd. 1929
A man in Bridport sold me this for £24. It was my first-ever ebay purchase - a shot in the dark. He obviously thought he was doing me a favour.  It works, but there are a few parts missing and the case is on its last legs. It took me quite a while to clean it and even longer to guess how to raise the type basket!