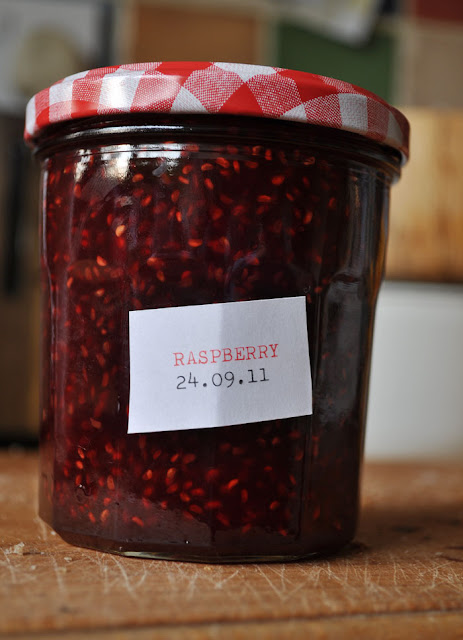 On this day in typewriter history...


I'd just like to call for a public round of applause in appreciation of Robert Messenger's outstanding contribution to the enrichment of the Typosphere.

Robert's On This Day in Typewriter History series has delivered a wealth of historical, technical and cultural insight over on his blog at oztypewriter.

He's having a break from the history lessons but promises to be back next year!
Posted by Rob Bowker at 11:22 6 comments: 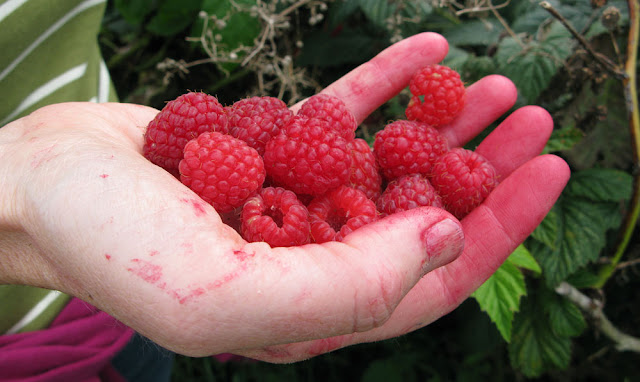 It always seems to end up being the last weekend of September by the time we get around to picking raspberries, today was no exception. Raspberry jam is one of those things that makes the prospect of shorter days, overcast skies and colder weather more bearable. There's a choice of a few fruit growers nearby, but Mrs Lester's mum at P J Lay's PYO on the Brightwell road is closest - about a mile away.
Posted by Rob Bowker at 01:43 5 comments:


Some ideas are so obvious, you wonder why nobody ever thought of them before.

The end of the beginning


Today is the day our local analogue TV signal begins its "digital switch-over". Never again shall I watch Charles Durning fall head over heels for Dustin Hoffman, non-digitally. BBC2 is the first to go and is playing out with Tootsie. The others follow towards the end of the month.

Over the years, analogue BBC2 has brought all sorts of wondrous programmes into our living rooms. Monty Python, Fawlty Towers, The Old Grey Whistle Test, One Man and His Dog, The Goodies, to name just a handful. Less mainstream than BBC1, BBC2 was the channel for experimentation, minority interest and unconventional humour.
Of course I haven't actually watched the analogue signal for years. Why would I? The digital picture is so much better. More consistent, less signal noise. I doubt it will be missed. BBC2 will still be there, though its digital signal arrives about two seconds later than analogue. The comparison will become meaningless within the next 20-odd hours*.
The thing is, this isn't the end. Once the TV signal is wholly digital throughout the UK in 2012, our broadcasters will turn their attention to radio - the wireless. A quick tally shows over a dozen analogue radio receivers in our house, plus one in the car. These are mostly small, portable devices which, if you had them all tuned into the same station, you can follow seamlessly through the house - brilliant!

Of course with Digital Audio Broadcast (DAB), the signal's quite clear and you get a programme description where there used to be a dial. You also get either a good signal or interference that makes the broadcast sound like it has been through a paper shredder and reassembled in the wrong order. No middle ground. DAB radios eat batteries twice as fast, and don't all deliver the same signal at the same time. Post digital, the famous 'pips' on the hour will be forever inaccurate by the time little DAB processors have reassembled them.

Still, should be fun tuning in to what's still available after radio follows TV into analogue oblivion. Will there be any stations punctuating the hiss and whine along the dial? Are those Eastern European propaganda stations still broadcasting analogue? What happens to Long Wave and Short Wave? One thing's for certain, you'll still be able to hear the sound of the universe being born. The echoes of the big bang whose radio waves don't need an Earth-based transmitter. Maybe 'white noise' will be all there is to listen to on analogue sets. Might be worth tuning in after all...
*STOP PRESS: At 1.13am BST, it actually happened. I wasn't waiting for it but BBC2 analogue has just disappeared, for ever.
Posted by Rob Bowker at 02:06 5 comments: 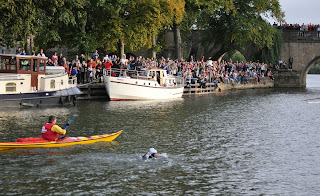 Still waiting for the typewriter muse to kick in so I'm sharing a couple of photos of a guy swimming the 140 mile length of the Thames for charity. This is just one of the 43466 strokes he's put in since the start. This evening, and a little behind schedule, David Walliams (...you know, the tall one out of Little Britain) beached at Wallingford. It seemed like the whole town had turned out to welcome him. Checking out Little Britain USA on HBO, seem's like David Schwimmer's a big fan.
Posted by Rob Bowker at 01:28 No comments: 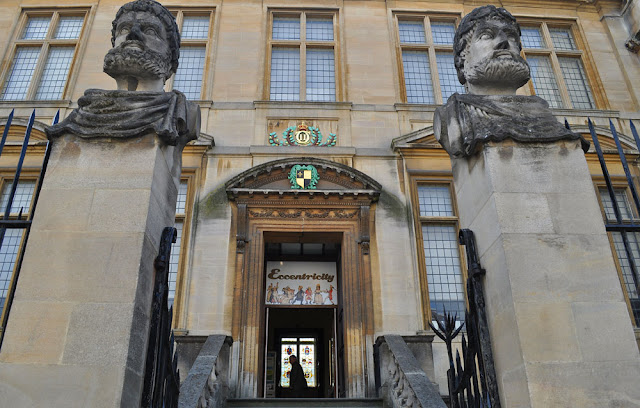 OK, so I mentioned this a month or so back and today, being a sunny 1 September, and having in tow the boy-with-the-broken-arm, it seemed a good opportunity to take the bus to Oxford and check it out.
As you can see, Oxford's Museum of the History of Science is an august edifice, sharing a row of classical busts with the Sheldonian Theatre next door. We call one of the statues "Uncle Stewart" because of the striking similarity to a family member.
Previously I'd seen a steampunk exhibition there which was  impressive - chiefly for the marriage of craftsmanship with  twisted imaginations. But most of the space is permanent displays of astrolabes, orreries, microscopes, telescopes and gadgets for generally figuring out how the world (and things which creep over it) ticks. The basement was a laboratory some time ago and giants of chemistry and the physical sciences have passed through it. From more recent times, they have a blackboard with notes chalked on it by Mr Einstein when he gave a lecture. That's the kind of place it is.
So we had great expectations of Eccentricity as we followed the sign down the steps to the back part of the basement. The first exhibit was a clockwork bird scarer. Hadn't I just seen a bunch of those for sale at an antique market in Villefranche-du-Perigord?
Hmm, expectations had started to fall in the dimly lit corridor to the next gem, a logic piano! An 1860s device which, at a stretch, could be a predecessor to the computer. The inventor intended it to be used to prove philosophical theories, apparently.

Round the next corner were a beer mat with a sundial printed on it, Marconi's civilian dress sword and cocked hat, an early wooden prototype of a rotary combustion engine and, at last, a few typewriters (why typewriters in an exhibition called eccentricity?) which had been the main attraction, at least for me. 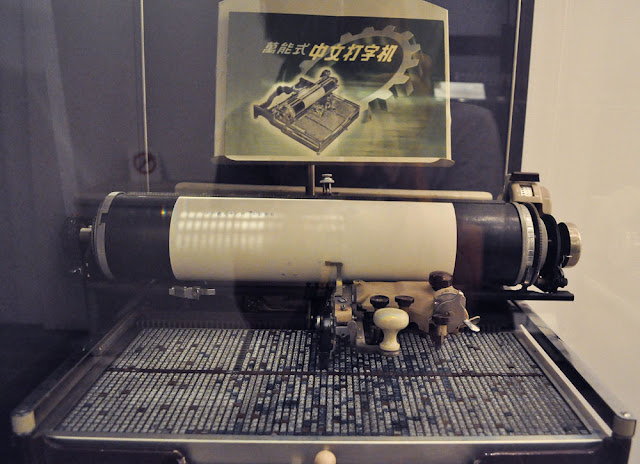 Star of the show was the Japanese Nippontype Chinese language typewriter. I haven't a clue how they work, but it surely must be more of an index machine than a 'true' typewriter. The case of type looks intimidating.

As well as a fairly predictable Oliver No 5, an Imperial Moya-design desktop and a Remington Home Portable, there were some interesting machines which I tried to photograph as best I could (camera set at ISO 3200, deep breath): 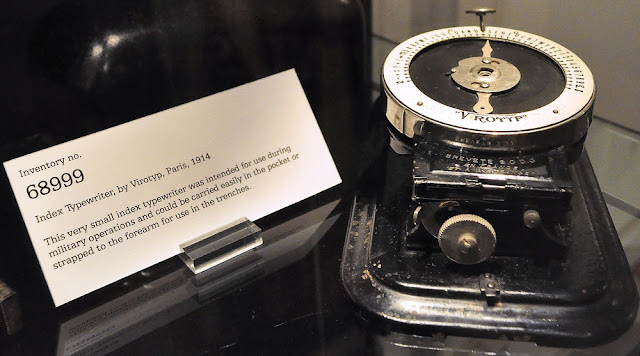 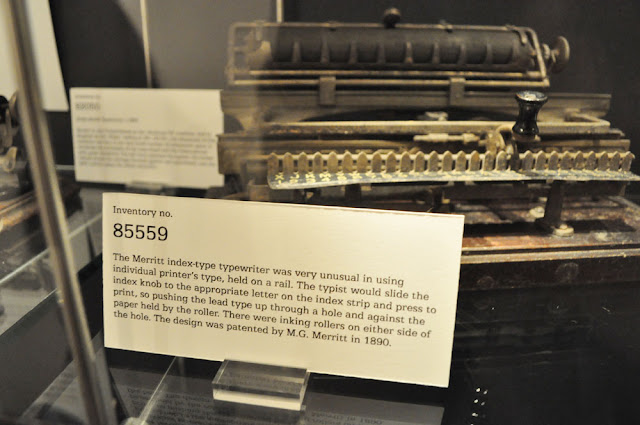 So, you can see them here MUCH better than in the exhibition itself. I wish my eyes had an ISO 3200 setting, or the museum had just put a few more light bulbs in. 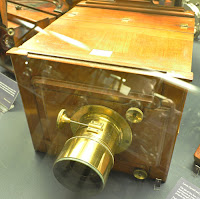 Wandering through to the old lab next door, I spotted Reverend Dodgson's plate camera. He was a mathematics lecturer at Christ Church college but he's much better known by his nom de plume, Lewis Carroll. Photographing the Liddell girls and writing crazy stories of Wonderland must have been a welcome distraction form dry academe.
And so up the stairs, out of the rabbit hole and into sunlight and fresh air in search of guitar strings for the young man. 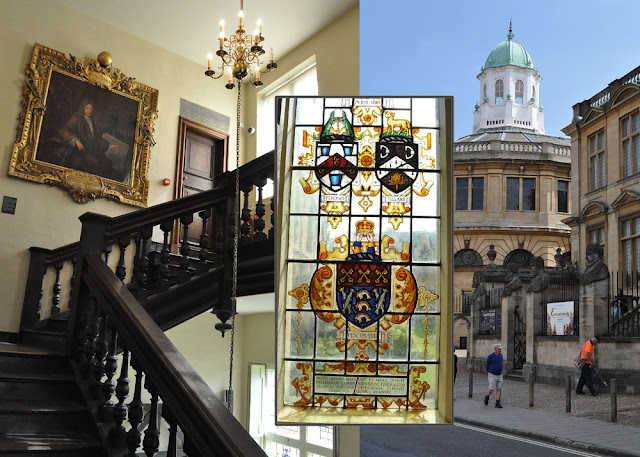 Email ThisBlogThis!Share to TwitterShare to FacebookShare to Pinterest
Labels: eccentricity, Museum of the History of Science, Oxford

Never Too Late to Look into the Future