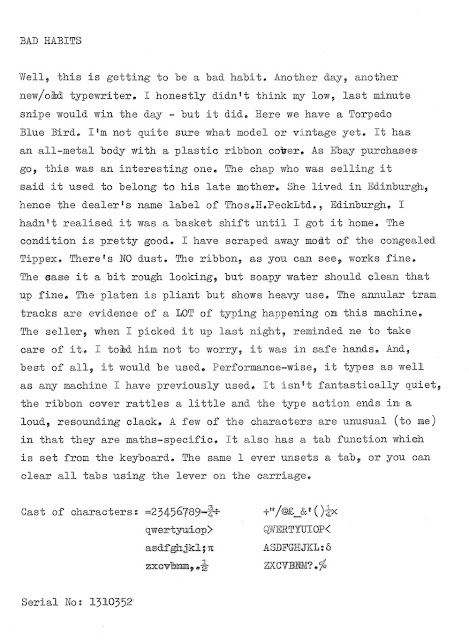 Footnote #1: I wouldn't really expect a maths typewriter to have an exclamation mark, but it seems strange that it has neither 1 nor zero - both figure prominently in maths I'm familiar with.

Footnote #2: Given the genealogy this machine might share with the Imperial Good Companion 5, I'm planning a "compare and contrast" photo-feature soon. First impression? They are totally different machines.
Posted by Rob Bowker at 12:06 9 comments: 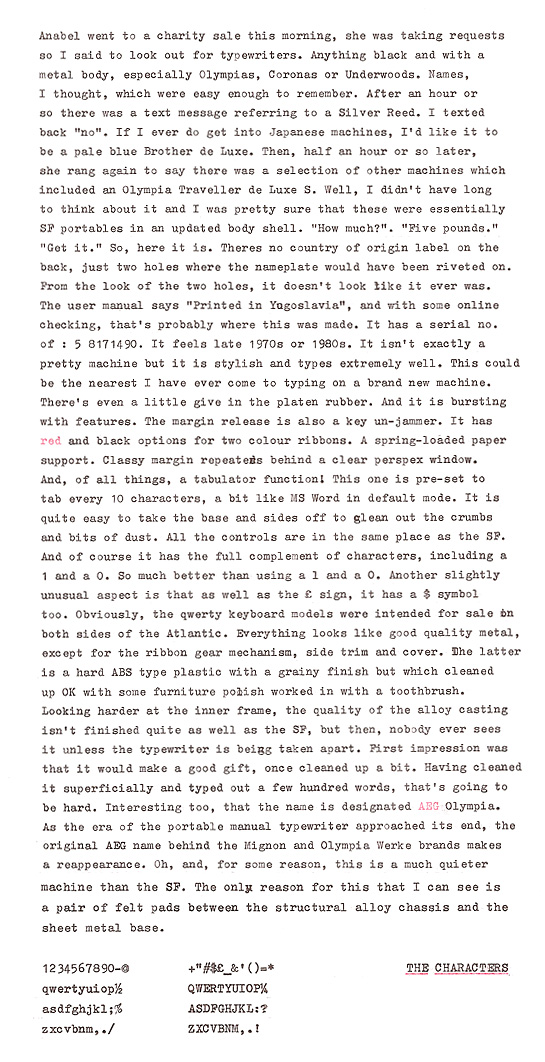 Almost forgot - it came with an illustrated manual - available here to download [4Mb pdf]
Posted by Rob Bowker at 18:19 22 comments:

Slightly wide of topic but hey, it is good to share.

This is no tropical rainforest - though it has been pretty wet recently. But, if you'd like to support the campaign against habitat destruction through mineral extraction, please visit the Communities Against Gravel Extraction website and have an opinion or make a donation.
Posted by Rob Bowker at 16:12 4 comments: 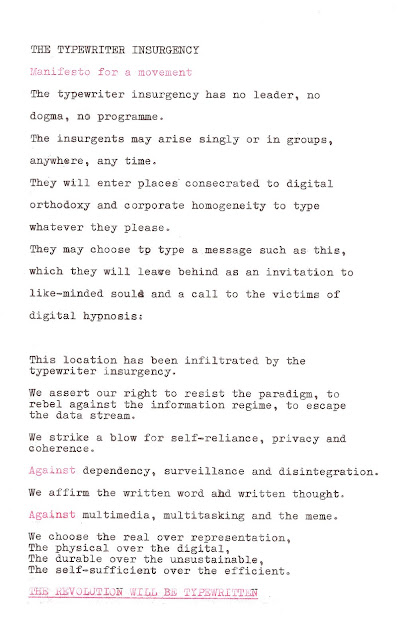 I found a new use for typewriters. Or maybe an old use seen from a new perspective.

I retyped The Manifesto (and translated it into English) and, of course, in so doing had cause to reflect on the strength of feeling and connection I made with the words. Typewriting does that, if you let it.

I had to fight hard against the instinct to type out the web address of either the "original" Manifesto or the typosphere. It seemed somehow inappropriate. As does sharing it as a scanned and uploaded rewrite of a typewritten original which itself was scanned, uploaded, wound-up and left ticking on Webstarts. So, no links - no tags - no attributions.

In re-reading it, there are sentiments here which chime resonantly with what M.T. "Back from the Wilderness" Coalhopper (see link on right) has to say about the Facebook.

I'm more inclined to treat typewriting as a means of balancing my existence in the data stream rather than replacing it. Yin Yang.

Whether I'll find sufficiently deviant outlets to leave this lying around, I don't know. But manifestos have proved to be equally powerful when carefully folded, tucked into a breast pocket and carried close to the heart.

Meanwhile, there's enough in the sentiment of the manifesto to at least make re-posting a facsimile a good thing to do. And it may be time already to update the rallying cry to:

"The Revolution is being typewritten"


Robert Messenger's recent post on Bar-Lock portables moved me to climb into the loft and drag out my much neglected Bar-Let Model 2. Many moons ago, I bought this from someone in Loughborough for either £6 or £16, I can't remember. A friend picked it up and held onto it for 6 months or so before I managed to collect it. Then I discovered that although it was a very interesting machine in lots of respects, it didn't work very well. But what value. All these years later it is still providing entertainment, but it is maybe time to address some issues.

I did manage to force-feed a sheet of A4 onto the platen and type a few words - not a pretty sight. Though the ribbon is OK, the alignment needs adjusting a pain, as it is a 3 bank with cap and figure shifts) but I think I have found the correct adjusters. But first, it needs to take paper and perform a reasonably efficient carriage return. The brass wire pins should be easy enough to replace. For new rubber for the feed rollers, I'll look for some tubing with more or less identical inner and outer diameters. I'm not sure how heavy duty the return lever spring needs to be, or what length, or what it attaches to... and I have no idea where to find a small screw and nut set for the margin rack - I wonder if a defunct electrical appliance might have the right scale hardware?

The excellent news is that the case is sheet steel and in good condition. The base-board is thick cork, through which the rubber feet of the machine are threaded. It generally stays fixed to the base board.

For ingenuity and innovation, the Bar-Let Model 2 scores highly and when it is up and running, I can find out if it truly is the rubbish typer it is reputed to be.

Alan Seaver's useful background to this typewriter.
Posted by Rob Bowker at 13:02 10 comments: 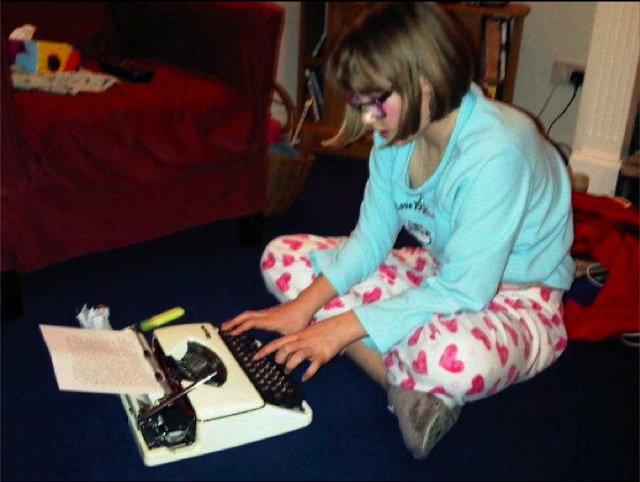 Off sick from school? Bored of daytime TV? No homework? No problem! Just come on over to Wallingford Typewriter Exchange and we'll sort you out with a loaner.

After trying quite a few different machines, Evie fell upon the Olympia SF with gusto (kid's got great taste) and ended up taking it home. Maybe it was the way I described it as a bit more lady-like than the SM2 she was wrestling with.

I hear she's on her second novel now (mostly in red, as it happens), and hopefully well enough to be back at school.

Now all I need to do is persuade her to bring it back... you see, it isn't my typewriter.

What happens next?
Posted by Rob Bowker at 11:00 3 comments: 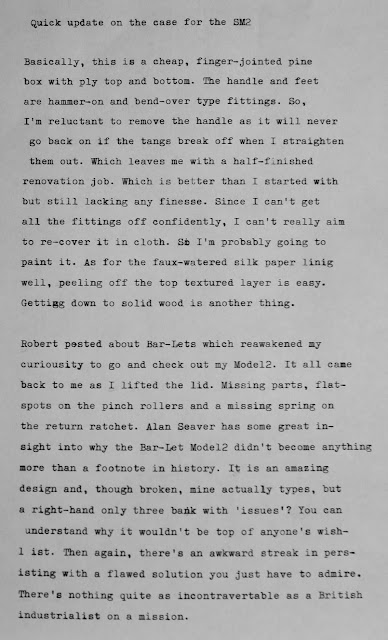